What does Laguiole mean?

The term Laguoile has become synonymous with knives and cutlery of a particular shape, however REAL Laguiole is manufactured in the Massif Central region of France, in Thiers and originally in the small village of Laguiole. Traditionally 70% of France's cutting tools were made in this region and Laguiole knives were originally pocket knives.

Nowdays "Laguiole" is neither a trademark nor a company name. Rather, the name "laguiole" became associated with a specific shape of a traditional knife common to this area.

Here is an example of an original style pocket knife below 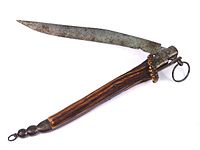 The laguiole was first designed in 1829 by Jean-Pierre Calmels. The earliest forms of laguiole knife were straight-bladed and handled, the so-called laguiole droit; the classic navaja-like laguiole seems to have been developed around 1860. The Calmels laguiole droit had a 'half-lock' on the blade where a small projection on the end of the backspring (mouche) exerts pressure on a corresponding indent in the heel of blade when the knife is open, this became a consistent feature of Laguiole knives.

In 1840, the first awl or trocar was added to the some laguiole knife patterns. In 1880, some models of the laguiole began featuring a corkscrew, in response to demands from the owners of bars in the Auvergne, and restaurants in Paris.

A modern laguiole folding knife of classic form with the blade open, the wooden grip scale shows the typical cross made of metal pins 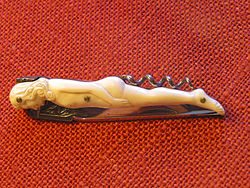 An early twentieth century laguiole knife with a corkscrew, the carved ivory handle in the form of a nude woman

Classic laguiole knives feature a slim, sinuous outline. They are about 12 cm long when closed, with a narrow, tapered blade of a semi-yataghan form, steel backspring (slipjoint) and a high quality of construction. Traditionally, the handle was made of cattle horn; however, nowadays other materials are sometimes used.

A 'Shepherd's Cross' consisting of 6-8 inlaid metal pins forming a cross can be found on the handle of some laguioles from the end of the 19th century to the present day. This embellishment is a reference to a legend of Catholic shepherds in need of a cross for prayer during their seasonal migrations between the mountains and the plains. Far from any chapel or cathédrale, the shepherd would thrust his opened laguiole blade-down into the earth, exposing the visible cross on the handle for purposes of prayer.

There is much mythology about the insect depicted on the spring. A legend identifies the design as a bee granted by Emperor Napoleon I (the bee was adopted as a dynastic symbol by Napoleon) in recognition of the courage of local soldiers. However, the "bee" on the laguiole knives was only introduced after World War II, more than a century after the death of the emperor. Technically, "la mouche" (the fly) is the end of the backspring, which sits over the rotating part of the blade. The upper section was expanded to form a thumb rest. Older laguiole knives feature many kinds of decorated springs which don't necessarily feature insects.

The name Laguiole has since been used as a trademark designation for various other implements, so that one can now buy, for example, a "Laguiole" corkscrew, spoon, or steak-knife set.

Petite France only supplies Laguoile products made in the Thiers region of France.